Just on the other side of the farm field next to our property is an old abandoned farmstead. All but the silo are either completely leveled through time or very near that state. All things are reclaimed by nature over time.

In the early spring and late fall, when the field is not planted, that farmstead becomes an archaeological dig site for my children and I. With a background in history, it’s exciting to be able to teach the kids to look beyond what they see to what they can ascertain about how people lived by what people left behind.

This last fall we found some artifacts in a old refuse pile. An old milk can, some bottles, broken tools, and a rusty can were all lugged home and left on the front step. They sat there through the lion share of the winter. What more damage can be done to it anyway? The good thing about history is the timeline allows you to put it down and re-investigate it when you can afford the time. Last week I took it upon myself to clean up the rusty can.

Upon first inspection I could make out some lettering but not enough to form words. After a good cleaning and two days soaking in a 50/50 bath of CLR and water, we determined that it was a can of Wilson’s Chopped Beef. Here’s where the historian takes over.

Wilson and Company was a meatpacking company from Chicago founded by Thomas E Wilson. Wilson started at a railroad car checker at the Chicago stock yards. By 1913 the industrious Wilson had worked his way up to president of the Morris & Company. In 1916 he left Morris to take over a struggling New York meat packing company called Sulzberger & Sons. The name was changed to Wilson & Co later that year and the offices were moved back to Chicago, where Wilson got his start.

In it’s time Wilson & Co had achieved great success, becoming one of the 50 largest industrial companies in the US. It had a profound influence on the marketing and manufacturing of processed meats that are still on the market today. An interesting note is that Wilson & Co acquired the Ashland Manufacturing Company which dealt in sporting goods. They changed the name of that division to Wilson Sporting Goods. Yes, THAT Wilson Sporting Goods. It seems an easy transition for a meatpacking company to also make use of the hides for ball that would later be the best friend of a shipwrecked Tom Hanks character.

Wilson died in 1958. In the 60’s Wilson and Co was bought and that ends the short history of Wilson and Co, the manufacturer of the meat that was consumed by the farmer. Being from Minnesota, it seems odd to find a surviving Wilson’s can when Hormel is such a big influence with it’s world renown SPAM. Still, competition in the canned meat business post WWII was fierce and varied with many producers duking it out on a national scale for dominance. There was a time when Wilson & Co were one of the big three Chicago meatpacking companies.

What is the purpose of this little history lesson? Until now, I did not even know about Wilson’s meats or what significance it played in the food industry, how it had been a successful company for half a century, and how it was tied to Wilson Sporting Goods.  All this because we picked up a rusty can in a pile of someone’s garbage in the middle of the woods. Fascinating! 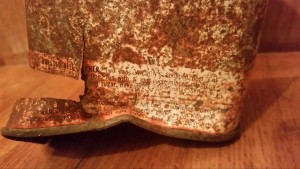